Since I’m undergoing all kinds of crazy cancer stuff, I tend to get a lot of attention, which I appreciate and love, especially when the attention comes in the form of compliments that include words like “amazing,” “inspiring,” and other flattering adjectives.  But there’s a secret to my success, and that secret is male, very cute, and his name begins with “K.”

Keith has been my husband since May 2005, but I knew he would be my husband in June 2003, just a few months after we started dating.  The reason I knew he’d be my husband is because he is, in a word, the best.  I mentioned in a previous post that I’ve been lucky with many things in life that don’t involve money and at the top of that list is Keith.

I had known Keith for a couple of years before we started dating and often saw him at parties with mutual friends.  One of Keith’s qualities is that he tends to be quiet in group situations, which means the depth of his personality is in stealth mode until you get to know him better.

In early 2003, I asked Keith to teach me how to play chess.  Although I didn’t know much about Keith, I knew he was kind of nerdy and very smart.  Smart because he taught high school physics and nerdy because he was good at chess.  He agreed to give me a lesson, so I went to his house.*

At his house, I saw his CD collection. “Damn!,” I thought. “He likes cool music just like I do.  This guy isn’t as nerdy as I thought.”  As a music elitist, having a good CD collection served as a pretty major compatibility test.  He liked Built to Spill.  I liked Built to Spill.  He liked Sonic Youth.  I liked Sonic Youth.  He like Pavement, old REM, and the White Stripes.  I did too.

We enjoyed each others’ company so much that we went to the Human Rights Film Festival in Brookline the following weekend.  It was during this “hanging out” excursion that I realized how funny Keith is.  Not just funny in a witty way, but funny in a witty, dark, and smart way.  Exactly the funny I like.  When we were done hanging out, I remember the distinct feeling that I wanted to just keep on hanging out.  And keep on hanging out we did.  By February we were officially dating.

One of my favorite early memories of our relationship is when I lured Keith from his Quincy apartment to Somerville, where I was living, so we could grab some food and catch a movie at the Somerville Theatre.  I had heard about an impending blizzard, and I knew if I could get him to my place, there was no chance in heck he’d be able to get home, thus assuring substantial extra time with him.

Keith fell into my trap.  We ate at Anna’s Taqueria and  saw “Confessions of a Dangerous Mind” in Davis Square.  After we left the theater, my Toyota Corolla kept getting stuck on unplowed roads as we navigated the mile and a half back to my place. 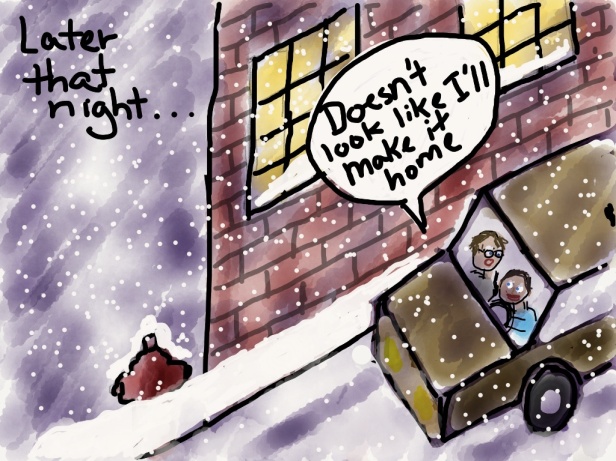 As Keith and I kept dating, I learned more and more about him and his personality.  I learned that he loves old school rap just as much as indie rock.  I learned that he has an amazing memory and can remember facts about history, current events,  politics, and music in a way that makes him an excellent analyst about pretty much anything.

During the summer of 2003, we spent five weeks traveling across the country.  We camped in state and federal campgrounds, and while camping in a Washington state park, we decided to get married.  We made it official the following January when Keith gave me a ring.

Through it all, Keith has been my rock, and one of the biggest ways he’s helped me is by continuing to make me laugh like no one else can.

He is both a talented prankster and actor and often uses his unsuspecting students as his audience.  He’s told his students that he lost his sense of humor in a car crash, that he used to be a priest, that he has a twin brother named Ken.  But this is my favorite:

The Blue Man Group story gained so much traction that fellow teachers were stopping Keith in the lunch room to ask him about the experience.

As anyone who has spent time with Keith and our kids can attest, Keith is an amazing father.  Not only is he the super-fun parent, he’s also loving, doting, and a good disciplinarian.

His devotion and sense of responsibility inspires me.  When I’m feeling morally challenged or lost, I look toward Keith for direction.  He has wisdom and insight beyond his years.

And when I feel hopeless or sad, he has a special way of reaching me and making me feel better. 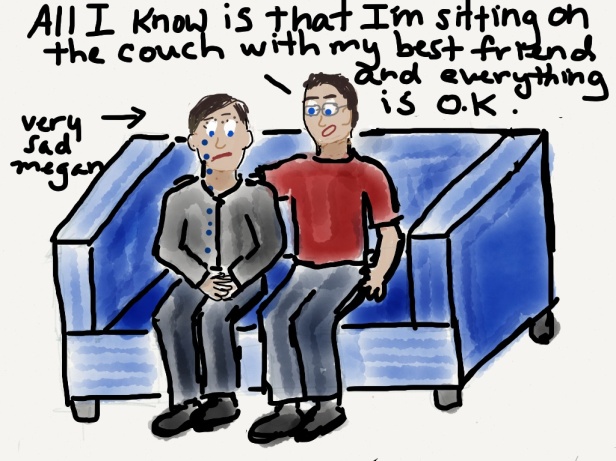 So, if you think I’m even a little bit cool or awesome, make sure to thank my husband.  He deserves a lot of the credit.

*Note: I never took more than one lesson of chess with Keith.  It was more fun doing other stuff with him.

7 thoughts on “Ode to my husband”

I'm Megan. In Dec. 2012, I was diagnosed with stage 3A HER2+ (aka scary) breast cancer at the tender age of 33. My son was 5 years old and my daughter was a 10.5-month-old baby at the time. I went through two rounds of chemo, surgery, and radiation, and thanks to Herceptin, a recent miracle drug targeted to my specific flavor of breast cancer, my odds of recurrence are low.

This Needham-based nonprofit started by two brothers in honor of their mother, Eleanor, helps hundreds of breast cancer patients every year with groceries, childcare, and housecleaning.

The SAMFund helps young adults cancer survivors (under 40 when diagnosed) with issues relating to health care, financial issues, resuming life post-cancer, and much more. They also give out grants twice per year.

True North Treks takes young adult cancer survivors and caretakers on wilderness treks with no upfront financial commitment. I've been canoeing in Utah and backpacking in Idaho with this fantastic group.
Loading Comments...
Comment
×
%d bloggers like this: